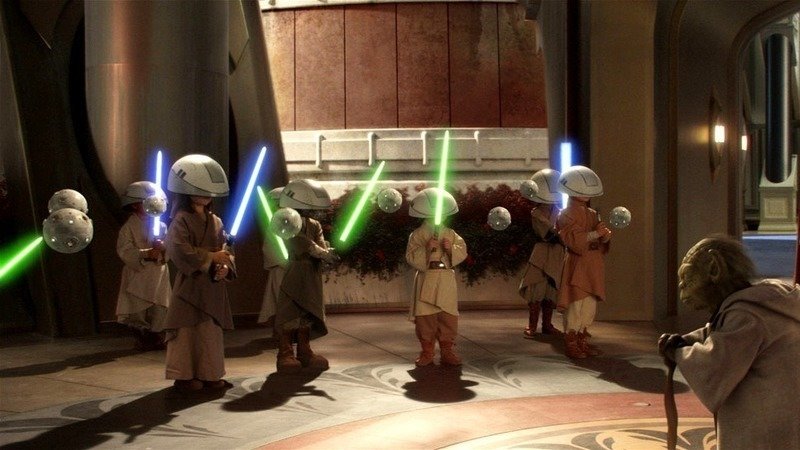 This title is the petition slogan of Dokuz Eylul University-Izmir, Turkey. As for the cause:

Thousands of Turkish students have petitioned their university to build a Jedi temple, in response to an increase in the number of mosques being built on campuses across the country.

The country-wide online debate started last month after the rector of Istanbul Technical University (ITU) Mehmet Karaca announced that a “landmark mosque” would be built on the university campus.

Meanwhile, at Dokuz Eylül University in the western province of Izmir, more than 5,000 students have called for a Jedi Temple.

The amusing online petition is merely the latest outlet of a growing discussion – and concern – around religious and civil freedoms in the country.

Late last year the Diyanet, Turjey’s government-controlled religious authority, announced mosques would be built at more than 80 universities across the Muslim-majority country. The government has not announced any plans to build any religious buildings to fulfil the needs of students belonging to minority sects or religions.

Last year thousands of students took to Istanbul’s streets to protest what they perceived as the growing Islamisation of their country’s education system.

According to census data from last year, around 99.8 per cent of the population identifies as Muslim (majority Sunni) with less than 0.2 per cent Christian or Jewish, out of 81.6 million.

These reactions which are growing against the trend towards of AKP government thoroughly Islamization of Turkey, as described in the news, has began in Turkey’s oldest technical university Istanbul Technical University (also, this school is one of the schools that I’ve taken education on this planet;)

Those, who put forward the idea of the Jedi temple at Dokuz Eylul University students to support to the students of Istanbul Technical University, their manifesto of the campaign as follows:

A long time ago in a place not too far away …
There was lots of Jedi’s in the World and in the Turkey too. But the main problem was that Jedi’s can’t be educated. In our time well educated Jedi knights are decreased day to day. Not educated Padawan’s basicly can’t control their power and forced to swap to dark side. Anger mostly causes their death. In purpose of educating new Jedi’s, the community needs to be together. To control that power, we want Jedi Tamples. There will be a Jedi Council in the tample, and we will train and raise new Jedi’s.
Jediism syncretic!
There is no emotion, there is peace.
There is no ignorance, there is knowledge.
There is no passion, there is serenity.
There is no chaos, there is harmony.
There is no death, there is the Force.

And at same page, some of students explain why they signed this petition with humor like that:)

* I am against the intergalactic imperialism

* End of our youth would not be like Anakin

* My whole family passed to the dark side because of not educated. I do not want to be a Sith:(

* If we want to go there into lunch hour, we cannot go. We cannot live our faith freely. Besides, education is necessary for not being Padawan always.

* We are tired of fluctuations in force anymore. We want to live in peace in our Jedi temple.

* I am supporting although I am Sith. We can not find the tight Jedi to fight.

We’ve captured the village in the morning,
The enemy has not withheld its fire,
Everywhere stone and ashes, what we saw
Nothing was left, believe it.
Perhaps formerly it was beautiful village,
What is it now standing?
On the gallows, maybe a body,
Blackened poplars by flashing.
Ambient ash; who sees ashes says these are snow,
Stoves similar tombstones.
Soldier, you came here late,
The village has been waiting for you too long.
We are walking on the streets,
There is still war far away.
White ash, here and there,
Brutal, reproachful glances.
A dog suddenly appeared in front of us,
It didn’t bark us exultingly.
It looked at our faces as if it says:
”Did you see what fascists did?”

I could not find his poems in English. I’ve tried to translation this one, but I don’t know how much I could make right.

for in Russian link: http://www.elbrusoid.org/articles/vzglyad/359035/