Skip to content
HomeThere is nothing new on the eastern front

Western imperialists are giving the weapons to the some Kurdish groups and they are “so-called” fighting against ISID at Middle East. In many countries the situation is the same at the region. In Iraq we already have seen, Iraq Kurdistan; in Syria it is on the edge of establishment of Kurdish otonom state; in Turkey the situation is under the very hard conditions; and now it is very clear that Iranian Kurdish have been supporting for many years by USA, British and Germany so almost all western governments under the name of military aid, so called fighting against ISID.

KHARABRUD, Iraq (AP) — An Iranian Kurdish rebel group received military training in weapons and explosives from U.S. and European advisers as part of the international program backing Kurds in the war against the Islamic State group in Iraq, the group’s commander told The Associated Press.

The group, called the Kurdistan Freedom Party, is one of several Iranian Kurdish factions that have carried out attacks this year inside Iran, sparking a crackdown by security forces. At the same time, the group has been fighting alongside Iraqi Kurds against Islamic State group militants in northern Iraq…

Speaking to The Associated Press this week, the Kurdistan Freedom Party’s commander Hussein Yazdanpana said he recognized that the training was for the fight against IS.

“They helped and trained us within the framework of the fight against Daesh,” or the Islamic State group, he said…

you are seeing how Iranian Kurdish separatists are supported by western imperialists. The real issue is to create the puppet Kurdish state, actually in real to create Israel-Kurdish state at the region on very large lands. The map we all saw, it is about to create state for Israel aims, it has never been about with to establish free Kurdish state. In first already we have seen this map which made by Ralph Peters who was former lieutenant colonel United States Army in 2006. 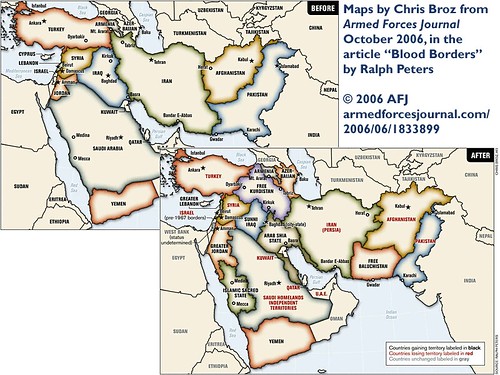 If they would achieve this aim, as you can see upper “after” part of the map, the lands of this state of Kurdish according to imperialists’ goal, it will be very large and almost biggest than Syria, Iraq, and close to the measurements of the lands of 2/3 of Turkey and half of Iran.

In Syria, the Kurdish opponents groups against Assad, are armed by western imperialists.

In Turkey, PKK terrorist organization is armed by western imperialists.

In Iraq, we know that already Iraq Kurdistan has been established by western imperialists.

In Iran, the Kurdish opponent groups who were already known fighting against Tehran management are armed by western imperialists.

Wow! How democracy lovers of these western countries and they are always trying to bring democracy to the Middle East countries! Hypocrites!

All tactics of the western imperialists are same and old, and there is nothing new at the east.

Let’s we focus again the issue is right now, so Iran. There is a PJAK which PKK’s Iran arms in Iran, and they have been fighting against Tehran management for many years, from the begining 2003. Their aim is “to establish Kurdish state in Iranian lands”. We see they chosen the name “PJAK” for themselves, so the meaning of “The Kurdistan Free Life Party”. Like PKK, their name is “Kurdistan worker’s party”. YPG in Syria, the meaning of YPG “People’s Protection Units”. All is using the terms like “free life”, “worker’s party”, “people”; very proper to get support from “democracy supporters” and to make propaganda; after all their names are smelling very leftist:)

I am really wondering the answer of this question, under the light of these informations, so the all informations about how the Kurdish organizations are supported by western imperialists,

-Is/was there any left organization or group which are/were supported by USA, and EU countries in military scale on planet Earth in all history of mankind; except these Kurdish groups in Middle East and Turkey?

How long USA and the other western governments have been supporting the “free life, worker’s life, and people’s life” into leftist scale!

I don’t have any idea, I have never seen they have supported the leftist ideas. But when it comes to Middle East and the Kurdish groups, all are being “freedom fighters” kind of the groups who are working over leftist idealism!

In Iran, about 3-4 million Kurdish origin people are living at western Iran. The western imperialist are supporting to them for seperating of them from Iran.

Maybe this may be knowledge for you, about Iran:

There are about 25 million Turkish origin people are living in Iran. And Iran total population is nearly 80 million people.

This thought can come to the minds:

“So if these Turkish origin people don’t want to seperate, they are living under very good conditions, and they don’t have any problem while they are living.”

Inside the article that I gave its link upper lines, you have seen that it is very clear that USA government is supporting the Kurdish groups-PJAK in Iran at military scales. US government and PJAK have always denied any form of cooperation between themselves until today. After today, USA government cannot deny anything.

What would be result of this?

More mess would be in the Middle East. Iran is not easy rock at the region. Western imperialists are behaving with a thought like “any of the Middle East countries cannot stand against us, and we are unstoppable, we are capable to do what we want,” continuously.

People shouldn’t forget that Iran is a hard rock, there is no way to overcome of Iran easily. Actually there is no way to overcome to Iran! This new news (actually not new but it is formalised anymore) will not be forgotten by Iran. Also, is USA government really ready to open a new struggle in Middle East? Or will eveything make a shape like Hillary Clinton says in 2008?  “If I’m President, we will attack Iran… We would be able to totally obliterate them.”

PS: Some one needs to tell her, she is in very piteous situation. What a wasting life that she lives while she is speaking and behaving like a monarch of all hatred.

Anyway, the game of western imperialists will be spoiled. The real issue is if it won’t be, will WW3 start before the foreseen date of it? My opinion is that if it can’t be prevented, WW3 would start about May 2017 formally. Yes, we are as the extraterrestrials have seen that generally biggest wars of humans are staring in spring days, and we don’t know why the humans like the days of spring to fight:)

And for the ones who are wondering my opinion about the way of fighting against ISID, if I don’t approve any Kurdish or the other opponents in Syria?

7 thoughts on “There is nothing new on the eastern front”