The inspiration for this title is the banner below.

At the Greek capital, Athens, held a ceremony marking the “May 19th, genocide of the Pontian Greeks”. Syriza and the Independent Greeks took the high level of participation from the coalition government. Government spokesman Gavrila Sakellaridis, asked recognition “political murder and persecution of Pontian Greeks’ from Turkey.

It is being claimed 353.000 Pontian Greeks people were killed by Turks in 1914-1922. (In fact, the organizers of the memorial day acted merciful. According to some web sites, this figure reaches up to 1 million!)

Is it surprise? Nooo! As I have said in one of my old posts:

Even the dinosaurs were wiped out by the Turks on Earth! Haha!

In fact, imperialists, who cause all kinds of dirty history and massacre, create enmity among other peoples to cover their own sinners by creating scapegoat. The Turks are the best example of the scapegoat in human history!

And in some countries like Greece, some fascists are being used for this creation. And this post is adressing these fascists, not the other Greeks!

At the meeting on May 19, that banner was seen, like the many others. It is writing on it:

“The non recognition of the genocide is a sign of Nazisim.”

As you can see, the 3 historical people on the banner. Second one is Ataturk, third one is Lenin. And I guess the first one is Tsar Nikolai Aleksandrovich Romanov, but I am not sure he is tsar or not.

Now, in this equation, if we remove tsar from the equation, the remaining two people have made their own countries independent, saved the people from the tsar and the sultan, and one of signed and created the Soviet revolution, the other one the Turkish revolution. And these people are included as two elements under a banner as an example of Nazism!

In the meantime, those who accused persons who would not be the fascist with Nazism, resorted to violence.

Yiannis Boutaris, age 75, the mayor of Greece’s second-largest city Thessaloniki has been treated in hospital after being beaten up by about a dozen people.

He was attending an event commemorating too, but the right extremists forced him to the ground, punching and kicking him. 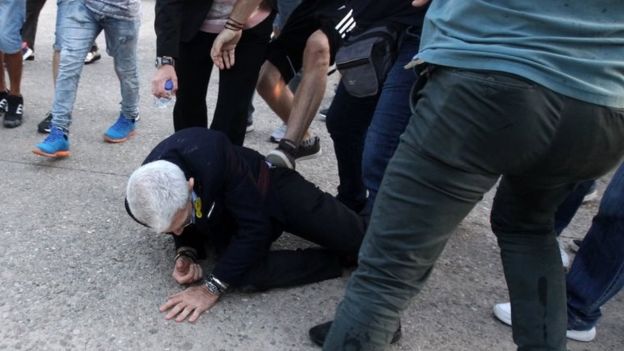 He is Thessaloniki mayor. And Thessaloniki is called “Selanik” by Turks. This city is also the city where Mustafa Kemal Ataturk borned in 1881. So many Turks visit the Ataturk’s house in the city for many years. The mayor as known as a person, who tries to give the effort to establish a peaceful dialogue between the Turks and the Greeks. Yiannis Boutaris received intense criticism after being elected mayor in 2012, because of his words “Turks are my brother”. Against the accusations, he had said that his aim “is not to be liked but to be useful.”

Now, when thinking, what can do these fascists who even can not bear the words of the peaceful people in their own when they see a peaceful Turk tomorrow?

It’s a very dangerous way! There have been those who have gone this way before!

Like, the Armenian terrorist organization Asala has killed 38 Turkish consul generals and diplomats in many different countries between 1973 and 1984, backed by the French government. These Turkish diplomats were in many different cities of countries, from Paris to Los Angeles. Some Asala killers of them were punished, others were free.

If 38 diplomats of US or Britain or France had been killed by an terror organization, then the boms would have rain to that country of terrorists. But when Turkish diplomats are killed, all western imperialists play three monkeys. Of course they will not see the terror they created themselves.

Why the Republic of Turkey and Ataturk are always the target?

Each country has important historical memorial or important days. Like 4th of July in America.

There are 3 important days of the Republic of Turkey. Every year the celebrations and festivities are being held for these 3 days.

19 May – The begining of the independence war of Turkey, the day which Ataturk started to path of independence, 19 May 1919

April 23 – The day of the opening of the first parliament of the Republic of Turkey April 23, 1920

This three day in Turkey, are celebrated as

May 19
The commemoration of Ataturk, youth and sports day

And let’s see, which days are being commemorated of Armenian genocide and Pontian genocide by some countries including Greece and Armenia.

Surprisingly there is not any commemoration genocide on this day yet. But I am sure one day, October 29 will be remembered as another country’s people genocide day which made by Turks. I do not thinks so, the imperialists will pass this day over, haha!

When I look to the especially selected days, I see Turkish revolution which was started by Ataturk and the Republic of Turkey where he led the build, caused distress to western imperialists. What about you?

I also believe that the fascists of every country are always condemned to return to the dark holes they come from. I believe that the Greeks do not/will not support the actions of these fascists and they always want to live in peace. (Please also read my post “έλα my brother” I wrote earlier.)

The two sides of the Aegean Sea are always close together. Even when you think you are farthest away!

2 thoughts on “The claims based on non-facts of history, and hatred are sign of Fascism!”