Kazim Koyuncu was born November 7, 1971 in Hopa, Artvin, Turkey. And he died June 25, 2005 because of the cancer while he was 33 years old. Artvin is a beatiful city where is coast to Black Sea, and you also remember Artvin my Earthling friends from my posts about how the people of Artvin resisted against capitalist mining at Cerratepe, Artvin. And they still do.

Artvin and the most coast to Black Sea cities of Turkey, have been suffer for many years beacuse of Chernobyl disaster. So many people died at these cites because of the nuclear fallout. Kazim Koyuncu was the one of them. And maybe the most beloved of them by almost every people at Turkey.

The people of Anatolia gave name to him “the boy with poet jacket.” This is exactly suitable for him.

He was an unique person, he was an activist, socialist, musician and song writer. He has said at once at one of his concert : “To understand to each other, there is no need to speak with same language, after crushing, we all are the same wine.” You can see him almost every activite against massacre of nature. When he was 23 years old, he has put together a band with his friends. This band name was “Zuğaşi Berepe”. It means in English “the children of the sea”.

“Zuğaşi Berepe” is not Turkish either. At the some regions of Black Sea coast there are the people who are called “Laz”. Turkey is a multicultural country. Many ethnic group live and resume their culture. Laz people are placed in Anatolia’s culture especially with their unique Turkish accent. It is so funny for everyone. So many jokes about themsleves are made. And very interesting thinking style they have. The things that they do, seem like a joke but they are also true.

For example in this one,

when two brother were in disagreement about the house which was heritage by their father, they cut the house into two. And one of them built a new house on his land share 🙂

Or you can see the warnings similar mind producing at the some cities of Black Sea coast at Turkey. 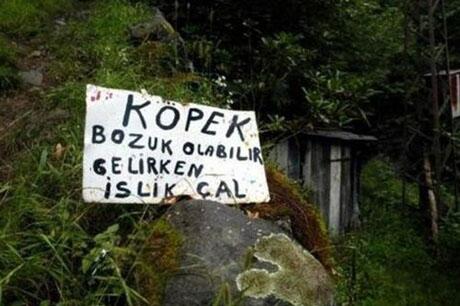 At the picture, there is a warning for the thieves near of the dog house, and in English this is writing:

“the dog can be off, while you are coming, you whistle.” 🙂

They are also named as “with Laz mind” in Turkey.

Kazim Koyuncu had Laz ethnic person. Laz people aslo are very exciting people. Inside the all Anatolian folk dances, Black Sea folk dances are the most speed ones. Their folk dance is named as “horon”.

7 geographic regions are defined in Turkey. One of them is the Black Sea region. And each region has its own folk dances different from each other. Begining with the elementary school after then at high school, and optionally throughout the university, the people are teached to play folk dance about own regions. This is a cultural heritage. And the hundreds of folk dance competitions are made in Turkey in every year. Black Sea region has not just horon dance, but in here I wanted to add only this one just for now.

And here, one of Horon examples, this is also from a competitaion of inter-high schools of Turkey.

It is incredible isn’t it! You hear a voice of a musical instrument from the begining 10th second at video. Its name is “kemençe”. This instrument is endemic only in Black Sea region of Turkey on the planet. Here some kemençe examples: 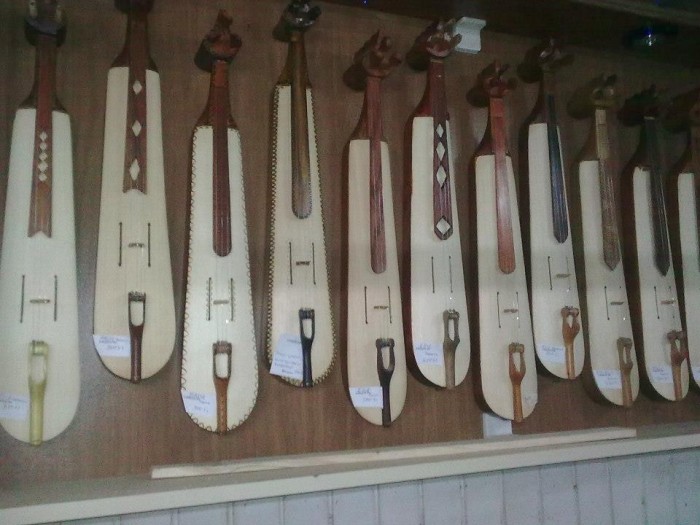 If you see this instrument, or hear its voice you should be in a place coast of Black Sea of Turkey, or you should be near by a person who from here:)

Also there is an another unique musical instrument at this region. It’s name is “Tulum”. You can hear it’s voice at 5.03 second at the video. These are tulum at the picture.

And tulum is ancestor of gaida instrument. I don’t say this, experts of musical instruments say this. 🙂

Kazim Koyuncu was using both kemençe and tulum in his music. And he had made incredible songs. His songs touched many people of Anatolia. People loved him and still loves him so much. Almost until the day he died, he was with the people at his concerts. He was the revolutionist. He said at once: “I struggled against the system of Turkey entire my life; but I have understood that eventually, the cancer is the same with the system.” Also, he knew he will die, and in an interwiev he said about dying:

“You do have a few months to live. You are asking yourself what do you want to take away with you. Money? No, money is good for nothing. Only left in your hands is life. What is life? You would sleep, you would go by closing your eyes. Luckily I became distant too much between me and property. But now, there is only one thing not to go, not to think die. There is a huge and strange love…”

He was right, so much right! There is still huge and strange love for him by the people of Anatolia. People loved and still love him and his songs. Almost half of his songs is not Turkish. But people loved/love his heart and knew/know what his telling in his songs without knowing Laz language.

Here is one of them, and maybe this one is most known of his songs “Didou Nana.”

The 90% of the Anatolian people who listen this song don’t know what the words mean of this song, but they know it’s lyric know by heart. This is the difference that was created by Kazim Koyuncu. And please listen this song with closing eyes, maybe it is understood more what I wanted to say. Any maybe you will realize the tears from your eyes unexpectedly…

I would have added this song to my post with high quality video with about 30-35 million people rating, but I didn’t. Yes his songs ratings are very huge. But, I wanted that you see with his live performance. People love so much him still, even when they see dislike below his videos, they curse the people who gave dislike. If you think to dislike his songs you should think twice, if you don’t know Turkish 🙂

As much as combative waves of the Black Sea, maybe the most sincere face of the Anatolian culture, the boy with poet jacket died exactly 11 years ago tomorrow. I know “11 years ago tomorrow” has been odd. Yes, tomorrow will be anniversary of his death. But I don’t now anyone who live so much alive in the hearts especially after his death. And the anniversary of his death is very wierd for me. He is so much alive, because.

Once, he said that: “for understanding how much worse the war is, we don’t need to fight.”

But after you left the planet Kazim, the wars and conflicts increased at the planet. You said that:

“The whole lands of the whole world are ours. All songs in the world belong the all people at the world. Also all lands are our homelands.” People miss your wisdom words.

And Anatolian people miss you so much day by day. You were a beatiful people, you have been always side by the people of Anatolia. There is no any musician like you anymore, who stands by the people’s resistance! You are the only one who is missed and loved so much like that…