The US government and the Pentagon have been saying for years that the YPG is not an arm of the PKK, that it is not helped. They are even condemning them allegedly at press meetings. However, there are a lot of news and resources on how the weapons sent to the YPG by the US government reached the PKK terrorist organization. These are also verified.

The US government, which also recognizes the PKK as a terrorist organization for many years, is constantly comes the issue over fighting of YPG against ISIS. Of course, let’s not forget that ISIS is an organization produced by the CIA and Mossad, and that we have already learned this with such as the experiment of enlightenment we got, from the people like Noam Chomsky and Edward Snowden.

And a day ago, a new image and information emerged against the US government’s declaration of refusing to provide any assistance to the PKK with this picture:

This picture was taken by journalist Hans Jaap Melissen. At the picture the banner with the photograph of the Ocalan, leader of the PKK terrorist organization at the backround of PYD and SDF groups.

According to news of Sputnik Turkey:

“The Pentagon spokesman White held a press conference in Pentagon with Lieutenant General Frank McKenzie, spokesman for the US Chief of Staff.

Besides, according to the news of Hurriyet newspaper, US Central Command (Centcom), made an explanation as: “We do not approve such images, we do not confirm”.

Let’s continue on the issue;

The information about the news and the used visuals became even more interesting with the explanation of the photograph made by the own, journalist Hans Jaap Melissen from his twitter account.

Hans Jaap Melissen gave this answer to reply of a follower’s question: 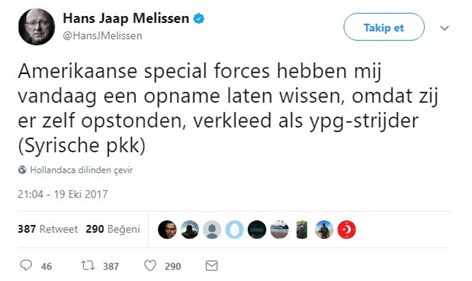 In this tweet, Melissen suggests that there are images of his camera records showing US soldiers dressed like YPG members.

My reaction is: “Wow! US’s Soldiers who dressed like YPG members! When US soldiers gave up to dress like US soldiers?”

After then, it gets even more interesting in his next tweet, that is,

Also, the issues has become more intresting, because Melissen suggested that,

According to newspapers as translated, Melissen said that:

“US Special Forces have made me erase the recording of today, because…”

So, it means that a journalist was forced to delete his records. And the freedom of information of the world public was blocked!

I’ve searched on the net today, and I wanted to see many reactions which came from western leftist media and its writers. I couldn’t find any big reaction, there were just the short news about that.

Where is the freedom of press!

Western leftist media insists (and I think most of them are consciously, I believe this anymore) on what they ignore is that the PKK is a terrorist organization.

Because, although the American government does accept the PKK as a terrorist, as long as the indirect aid it gives to emerges in these forms, it does not come any loud voice from the left western media.

When it comes to reason, they have convinced themselves and the public that they are a kind of freedom fighter of the PKK for years, especially for about 10 years, in the light of the news based on distorted historical facts that they shared too.

For example, while the same left-wing western sources transmits the deceased PKK members were being portrayed as hero at the operations of Turkish armed forces, they did not write that thousands of people, including dozens of teachers, dozens of workers, dozens of civilians including children have been killed by PKK for more than two decades, inside the borders of Turkey; and they still do not write. And many of these people killed by the PKK are Turkey republic citizens of Kurdish origin (I never like to write anything about people’s ethnics, but I have to do now, unfortunatelly).

What the Western left media does not understand is,

The sociological structure of the Turkey is not like Iraq or Syria. For example, in Iraq or Syria there are Kurdish, Turkmen and Arab regions that are determined by sharp lines. They even distinguish themselves according to the religion they are attached to. But in Turkey there is no such differentiation. From the east to the west in Turkey, Kurds and Turks and others marry with each other, live together, and a society of natural mixture emerges for many decades. Can you divide a family into two, as mother side is Kurdish, father side is Turkish?

PKK was created by western intelligence agengies, in the begining of 1980’s. When we look at those days, we see that there was a fascist military coup in Turkey. Which is it was a coup CIA backed up. Unacceptable mistakes made by the Turkey government in 1980’s against the citizens of Kurdish origin in the south eastern Anatolia region, played the biggest role in the establishment of the PKK. And the organizations like CIA have strengthened their hands, about using the PKK. Although all western(including right and left wings) biggest support of PKK, PKK was never able to separate to Anatolia people into two.

When all this is knowingly or unknowingly ignored, the western leftist media plays three monkeys when it is claimed that the American soldiers have dressed like the PKK, and even the images of these are forcibly removed by US Special Forces. “I did not see, I did not hear, I did not know.”

Not having the virtue to accept historical mistakes that the leftist western media made by itself, nowadays put them into a position where they cannot defend even the freedom of the press.