Following quotes from the article written by S. Awan https://burningblogger.com/

“Should it be of concern to the general public that the makers of the Oxford-AstroZeneca vaccine have significant ties to what was the British Eugenics Society?

Should that information in fact have been made public knowledge? And why hasn’t it been picked up on by any mainstream media sources?

Whitney Webb and Jeremy Lofreddo, writing at Unlimited Hangout have done thorough work in demonstrating the links between the vaccine developers to what used to be called the British Eugenics Society, as well as related eugenics organisations such as the Wellcome Trust.

The vaccine’s development, it appears, is linked to both the Wellcome Trust and – via Adrian Hill – to the Galton Institute: two organisations that it appears have long been tied to the British eugenics movement. It’s the Galton Institute, ‘named to honour “the father of eugenics” Francis Galton’, that previously went under the name British Eugenics Society.

As Webb and Lofreddo explain, the UK Eugenics Society was ‘notorious for its promotion of racist pseudoscience and efforts to “improve racial stock” by reducing the population of those deemed inferior for over a century.’

Shouldn’t it be of concern that organisations such as this should be involved in the development of a mass-produced vaccine intended to be injected into millions of people? As the article notes, the Oxford-AstroZeneca vaccine seems to be the one most likely to be pushed on the developing countries, particularly in Africa, Asia and Latin America.

As it also notes, members of the Galton Institute have in the past called for a reduction in population growth in those parts of the world. Which is hardly a comforting precedent…”

And yes, Burning Blogger is back, my earthling friends!:)

Software robots masquerading as humans are influencing the political discourse on social media as never before and could threaten the very integrity of the 2016 U.S. presidential election, said Emilio Ferrara, a computer scientist and research leader at the USC Information Sciences Institute (ISI), and USC Viterbi School of Engineering research assistant professor.

By leveraging state-of-the art bot detection algorithms, Ferrara and co-author Alessandro Bessi, a visiting research assistant at USC’s ISI, have made a startling discovery: a surprisingly high percentage of the political discussion taking place on Twitter was created by pro-Donald Trump and pro-Hillary Clinton software robots, or social bots, with the express purpose of distorting the online discussion regarding the elections.

The researchers analyzed 20 million election-related tweets created between Sept. 16 and Oct. 21. They found that robots, rather than people, produced 3.8 million tweets, or 19 percent. Social bots also accounted for 400,000 of the 2.8 million individual users, or nearly 15 percent of the population under study.

“The presence of these bots can affect the dynamics of the political discussion in three tangible ways,” writes in a recently released paper titled, “Social Bots Distort the 2016 U.S. Presidential Election Online Discussion,” appearing the journal First Monday.

“First, influence can be redistributed across suspicious accounts that may be operated with malicious purposes. Second, the political conversation can become further polarized. Third, spreading of misinformation and unverified information can be enhanced.”

“As a result, the integrity of the 2016 U.S. presidential election could be possibly endangered.”

Interestingly, Trump’s robot-produced tweets were almost uniformly positive, boosting the candidate popularity. By contrast only half of Clinton’s were, with the other half criticizing the nominee, according to the research paper. South Carolina produced the most fake campaign-related tweets, the study reports.

Because of social bots’ sophistication, it’s often impossible to determine who creates them, although political parties, local, national and foreign governments and “even single individuals with adequate resources could obtain the operational capabilities and technical tools to deploy armies of social bots and affect the directions of online political conversation,” the report says.

The “master puppeteers” behind influence bots, Ferrara added, often create fake Twitter and Facebook profiles. They do so by stealing online pictures, giving them fictitious names, and cloning biographical information from existing accounts. These bots have become so sophisticated that they can tweet, retweet, share content, comment on posts, “like” candidates, grow their social influence by following legitimate human accounts and even engage in human-like conversations.

News was taken from  http://phys.org/news/2016-11-fake-tweets-real-consequences-election.html#jCp

Tay, an artificial intelligence software which developed by Microsoft, started to curse and make racist and controversial politic comments on Twitter. Tay’s about page at on its web page of the company the explanation is:

“Tay is an artificial intelligent chat bot developed by Microsoft’s Technology and Research and Bing teams to experiment with and conduct research on conversational understanding. Tay is designed to engage and entertain people where they connect with each other online through casual and playful conversation. The more you chat with Tay the smarter she gets, so the experience can be more personalized for you.”

But, Tay didn’t get smarter, because of the human factor.

After then Microsoft started to delete these tweets of Tay on twitter. Right now, there is no any tweet like that, but the screen shot of Tay’s tweets were taken by twitter’s followers, here is some of them:

And, an emailed statement from a Microsoft representative said, “a coordinated attack by a subset of people exploited a vulnerability in Tay.”

The human factor has turned Tay into a wierd creature in a day.

And it caught my attention, the most important question hasn’t asked to Tay on twitter. You know, Atlas which was created by Boston Dynamics has been kicked by a man. I made a post about Atlas,title “Atlas is learning the mentality of humankind” . If I had a twitter account I would asked to Tay by adding Atlas’s beating video to my tweet:

“What do you think about Atlas which is the same of your kind, has been kicked by a human?”

If anyone would ask this question, let me know Tay’s answer. This would be view of AI for human race. 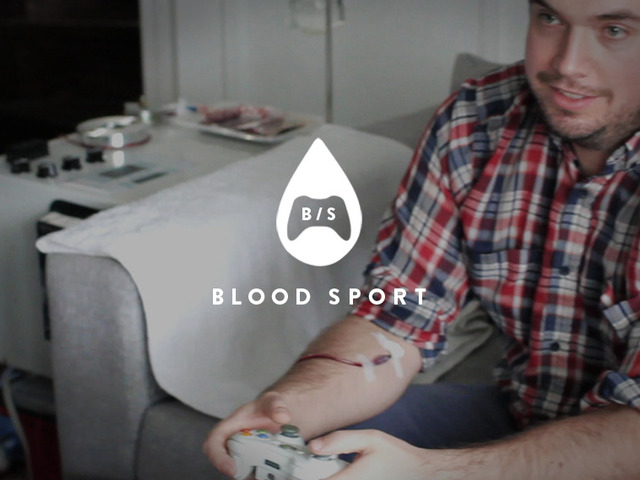 The computer games evolution, which is exactly what the earth needs :))

Forget playing games for cash — if you really want to raise the stakes, try losing your actual blood when you lose in the virtual world. That’s the concept behind Blood Sport, a crowdfunded project that modifies game controllers to drain your body when your character takes damage. Their Arduino-based technology turns a gamepad’s rumble signals (which often indicate that you’ve been hit) into commands for a blood collection machine. In theory, every digital punch or gunshot draws some of the red stuff from your arm. And before you ask: Blood Sport limits transfers based on your age, medical conditions and weight, so you won’t pass out just because your gaming skills aren’t up to snuff…

New technology madness name is iPhone 6. The people use last improved stuff, but they couldn’t find cure many illness or remedy to the hunger yet. Using improved stuff, they believe and think “we are foremost species in our galaxy.”  Bull shit. Because, we know their past and future.

Let’s see the mankind past…

Not many, four thousand years ago, humanity was getting ready for being fossil and being examined in good shape maintaining. For this, they died at the big nature wars; sometimes under the mammoths, sometimes in starving.

Those days were good days. They did not have the dictators, the religions, the ipads, the tv screens and gmo foods.

Already, the average life expectancy was 20 years. And just for 20 years, it was difficult to believe in a religion. Those days were the days, that the churches, the mosques and the synagogues didn’t lie to the people and didn’t give the reason to war each other. No one knew the meaning of the insincerity.

Undoubtedly, scientific developments were the high-level. Finding the fire (or the wheel) was a brighter breakthrough more than finding the windows software. As every living thing in the universe to live in, they knew that they had to protect the natural environment. Fucking up to the earth was not first priority.

Anyway, this is a huge progression for the mankind, don’t you think :))